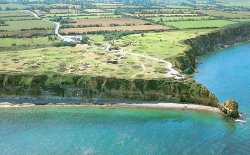 Part of Hitler’s Atlantic Wall, Pointe Du Hoc was constructed by the German Todt Organisation and is situated between Utah Beach and Omaha Beach. This battery consisted of six casemates that housed captured French 155mm guns.

As famously depicted in the film The Longest Day, the U.S 2nd Ranger Battalion was tasked with destroying this strongpoint on D-Day as it posed a real threat to the soldiers landing on Utah and Omaha Beaches.

The Rangers who were ordered to capture this position, had trained for months In England. It was an extraordinary task that had been set for them; to capture and silence this battery, the Rangers would first need to scale cliffs with ropes, ladders and grapples. All this whilst under heavy enemy fire.

Once the Rangers managed to get a foothold at the top of the cliff, fierce fighting eventually cleared the battery and Pointe Du Hoc was in the hands of the American’s. To the dismay of the American Rangers, they discovered that the 155mm guns were only painted telephone poles. The actual guns had been moved further inland following orders given by Erwin Rommel. The guns were found later by an American patrol and subsequently destroyed. It became apparent that the guns were targetting only Utah Beach. 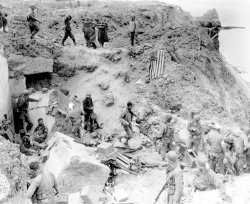 The area of the German battery at Pointe Du Hoc witnessed severe air and naval bombardments and the terrain now resembles that of moon craters; massive holes marking the explosions from allied bombs. There is no doubt that this must have been terrfying for the German’s manning this position during the allied invasion.